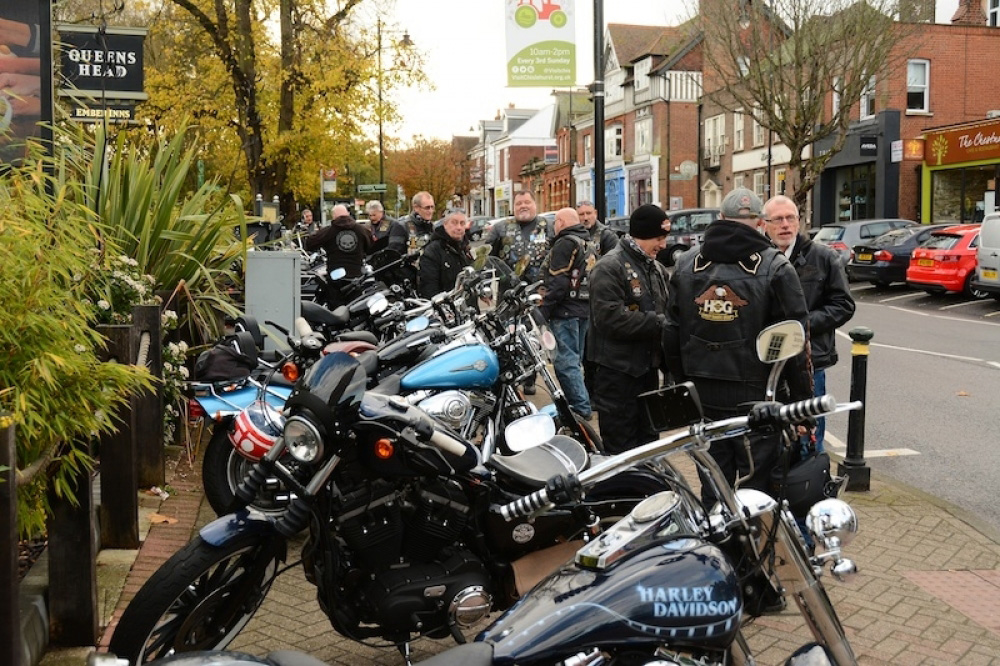 "Having met up with Bernie Cresswell for the early morning ride up from deepest Kent, we set off for the usual breakfast at ‘The Chestnut Café’ in Chislehurst to meet up with other Chapter members who would be joining us for the Remembrance Sunday ceremony later that morning.

As often for this event the day started with rain and this year was no exception! That being said the sun rarely fails to appear at the appropriate time and pleasingly, by the time we were passing Brands Hatch on the M20, the rain had subsided as London appeared in the distance, things were looking hopeful!

The forecourt of ‘The Queens Head’ quickly filled up with bikes from Meridian Chapter members, and as with previous years, by members from the Kent Branch Honda Owners Club. The Queens Head pub kindly opened up just after 09:00 this year allowing bikers the use of their premises as a helmet park and also to serve teas and coffees to those looking for a ‘lighter’ start to the day.  The Pub forecourt also serves as a gathering point for local community groups including Beavers, Cubs, Brownies and Scouts who had their usual range of cakes and refreshments for sale in order to raise some additional funds.

Once again Chapter Member Fred Blunden was Parade Marshal, Steve Uffindell was RBL Standard Bearer and they were also joined at the front this year by Barry Masters.

Meridian Chapter members took their place in the parade further back and, as ordered, the group of several hundred departed through Chislehurst and over the Common to the Cenotaph to join other local groups for the ceremony.

This year again saw a large number of people attending, not just for the ceremony but the parade itself, this stretched almost the entire distance from the Cenotaph back to the common.

After around 15 minutes the parade arrived at the Cenotaph. It took a while to accommodate all those attending, but once settled we all stood shoulder to shoulder as equals and in solemn remembrance of those who gave so much.

As usual there was a very dignified 2 minutes silence, giving a moment to pause in the bright sunlight to remember those many millions who gave so much for our continued freedom and way of life over the years in conflicts past and present.

Wreaths were laid on behalf of Meridian Chapter Members and ‘The Monte Casino Society’ by Bernie Cresswell and ‘Shiny Tiny’.

The Ceremony ended with the evocative Kohima Epitaph:

'When You Go Home, Tell Them Of Us And Say,
For Your Tomorrow, We Gave Our Today

At the end of the ceremony the parade headed back to Chislehurst and the Queens Head for refreshments before a quick gather up of those who wished to extend the day for a ride to ‘The Royal British Legion village’ and their Garden of Honour in Kent. About 10 gathered for the trip down to Aylesford. There we spent a few minutes wandering around the gardens in quiet thought of both the day and all who gave….We will Remember Them.