For millions of people Remembrance Sunday marks a very special time of the year, this of course includes Meridian Chapter members and other Chislehurst community groups, 2019 being no exception. Pleasingly after a long and seemingly endless period of rain throughout October and early November the clouds finally drifted away to produce reasonably clear skies for the 2019 parade and service of remembrance.

Once again it was well attended by all including around 30 Chapter members helping to swell the combined numbers to around 300 -  Meridian Chapter Road Crew member and Parade Marshal Fred Blundell was sure to have his work cut out!  Unfortunately, this was not made any easier by local Metropolitan Police Senior officers decision to scale back support for events this year.

That said, always up for the Challenge, Fred called the parade into line and headed by Road Captain and RBL Standard bearer Steve Uffendel, the group proceeded towards the War memorial.  This year Road Captains Enzo Orsi and Nick Franklin were nominated with the honour of laying  wreaths on behalf of both Meridian Chapter and ‘The Monte Cassino Society’,  both Enzo and Nick flanked the Standard bearer at the march lead.

For Safety reasons, the service of remembrance this year was held on an area of Chislehurst Common adjacent to the War Memorial due to the presence of passing traffic, but in all, the event took place smoothly and safely under the careful stewardship of our Parade Marshal , this includes the march back to our gathering point at ‘The Queens Head’

In all another successful event and as with previous years it was an honour for the Chapter to play a significant part in this important event including laying wreaths in memory of those who gave.

We Will Remember Them 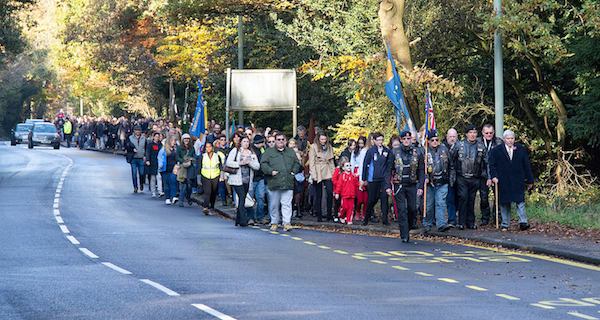